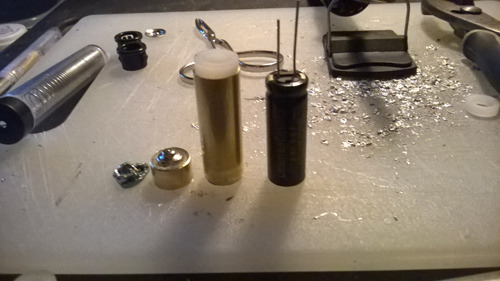 I’ve had a lot of people ask me to comment on THIS project in Kickstarter.

It was supposed to be a rechargeable battery based on Lithium Ion Capacitor technology.
Ok, cool, nothing wrong with that, sounds good. A guy has mated a Lithium Ion Capacitor with a small custom regulator and fitted it into a standard AA size battery holder.
It even has a nice novel quick charging ring on the outside (could it short out to something though?).

So it’s all looking quite neat until you read the specs where he claims the capacity is 1150 mAh, and can recharge in a claimed 30 seconds, and that’s when people started to call BS on this idea, and I was one of them.

I was going to do a video on this, because it’s fairly easy to read the DATASHEET for the cap and calculate the maximum charging rate and capacity of such a system.
Some people have already done this HERE and HERE.
Turns out that the capacity is going to be more than an order of magnitude less than the 1150mAh claimed! About 35mAh or thereabouts, about 1/30th of that claimed. And it can’t be charged in 30 seconds, it’ll take at least 60 seconds according to the datasheet max rating. You canna’ change the laws of physics Captain! 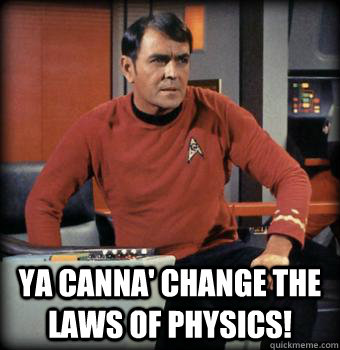 So this guy copped a whole host of deserved criticism about the capacity, but rather than provide test data he just said:

“As far as how long my battery will last, per charge, I can tell you this. I put one in a toy that my 1 year old daughter plays with every day, all day. It’s been in there for a week and it’s still going strong.

Oh dear. Huge red flag right there. You can’t throw out a capacity figure and not prove it with basic controlled tests.

But here is the kicker (pun intended), what does he say in response to all this technical criticism? Instead of providing the test data, or admit he simply got it wrong, he SPILLS THE BEANS on what the project is really about…

He’s going to get a manufacturer to use his own home made graphene powder that he supplies them.

Well, ok, you can make your own graphene, and there is quite a deal of research going into graphene capacitors.

But he’s now gone from implying that he was using existing Lithium Ion Capacitors and needed the money to mass produce the PCBs, to now saying he needs $8K (80% of total) to pay the manufacturer to make these magical graphene capacitors for him, likely coated in pixie dust (my guess).

Woah, dude, you can’t do that! You can’t run a Kickstarter campaign claiming (or implying) one thing, and then completely changing the technology and what the risks are.

And it gets funnier. Rather than provide the data to back up his capacity claim, he doubles down on the toy test:

If anyone thinks a child’s toy is a poor platform to use to test a batteries endurance, think about it this way. Children’s toys aren’t made to be energy efficient. They drain batteries quickly and the toy manufacturer probably has some sort of an agreement with battery manufacturers saying, “Give us a cut and we’ll make sure people have to buy lots and lots of batteries.” On top of that, it also gives the battery a chance to take the physical abuse of a 1 year old throwing the toy around.

Wow. No, sorry, that’s not how proper engineering tests are done on battery capacity. At the very least you need a defined load and to drain it to a specified voltage level, and get the resultant capacity graph.
Ok, a toy test is actually done by battery manufactuers, but it’s not recommended and that is why there are ANSI standards to simulate these things, and good manufacturers follow these in the their datasheets.
e.g. the standard “toy test” is 3.9ohm for 1hr/day

But ok, your battery uses a post regulator which will have a flat discharge curve. But at the very least you can do a system discharge of a known current vs time and plot it anyway. Without that, your talk is just that, useless drivel.
You are the one that came up with a figure of 1150mAh, tell us how you arrived at that figure?
If you can’t do any of that then you have no business being in the battery business.

So it is clear he either has no clue how to measure battery capacity, or doesn’t want to, or has done it and won’t release the results. So either clueless, hiding something, or running on wishful thinking.

Not to mention actually getting a capacitor manufacturer to make custom batteries for you using your own supplied material. I find that very hard to believe, and most likely not for $8K to a guy in his garage. But ok, I’ll assume you can do that.

This video of the charging and discharge testing is just SO CONVINCING!

Then he doubles down again with extra arrogance:

If, for some reason you don’t believe these claims, well, I invite you to pledge enough to get a battery and run it through your own rigorous tests. I’ve had 2 in one of my daughters toys for weeks now without recharging and it’s still going strong. Graphene capacitors haven’t yet reached the market, so, here is your chance to be one of the first.

No dude, that’s not how it work, unless you are targeting gullible people the burden of proof is on you to show the data that your graphene capacitor has the stated capacity.
Even more so that this is a custom capacitor using your own magic mix.
You do actually have sample parts in hand right? Otherwise that should have been mentioned in the Risks & Challenges section.

At the very least this campaign should be closed for false representation of the risks and what it was about.

But the 2nd kicker is that even if this magic graphene capacitor can be produced, the best produced yet graphene based Lithium Ion Capacitors at Monash University is 12 times higher volumetric efficiency than the best existing Lithium Ion Supercaps.
So even if this project used the cutting edge of graphene capacitor research in order to get increased capacity, it’s only going to get to maybe 420mAh at best (35mAh x 12). Still not close to the 1150mAh claimed.
Not to mention that the graphene supercaps still aren’t production ready yet.
But hey, a guy on kickstarter recons he can do it in his garage and by throwing $8K at a capacitor manufacturer. Yeah, no worries!

There is also an Instructable with, well, bugger all info.

Please explain how you are going to charge your battery at 159A?
This is getting beyond ridiculous. Anyone with any electronics engineering knowledge knows the technical challenges involved in charging anything at 160A, let alone a AA battery.

Bottom line is this project stinks. It leads people into thinking it’s one thing (off-the-shelf cap) and then pulling a rabbit out the graphene hat when pressed on the details. And then refusing to provide any real world data. But most of all, the numbers simply don’t add up, not even close, it is demonstrably not going to happen.
The force is not strong with this one.
He’s too deep down the rabbit hole to admit he got it all horribly wrong.
Stay clear, this project will not deliver.