Or, in other words, how it can all go horribly wrong…

It all started as a simple thing to keep some people happy. More and more people were asking if they could get a µRuler I gave away as a promo at the Electronex trade show.
So on a whim I decided to start a crowd funding campaign on Pozible.
It seemed like a piece of cake. I’d make a decent batch of 500 rulers, say 5 per person, I could probably find 100 people who want one.
So some simple math said a campaign target of $2500 would do the job. Enough for the rulers, $2.60 postage stamp for each one, and enough left over to make it worth my time.
And I knew you could send PCBs in envelopes by regular letter mail, as they are less than 5mm thick, and durable. Letter mail meant no CN22 international customs form, just slap a stamp on and mail.
This will be the easiest “hardware” project manufacture and mailing in history!

2290 people decided they wanted one!, and within days my campaign had become the most backed project in Pozible history.

Ok, no problem, find a local mailing house. This wasn’t that easy, as many didn’t want to know, but I eventually found one that would, and gave me a quote for the job that wasn’t unreasonable, I still had budget for that.
TIP #1: Allow extra budget in case your project goes crazy, and you have to start paying people to do stuff for you. They don’t work for free.

Because I had ordered some rulers as soon as I hit my goal (Pozible gives you the money straight away, very nice!), I had some on hand and wanted to send some out. So I decided to do a small trial run of 200 or so myself and see how it went. As luck would have it, that’s how many Australian orders I had, so I did those all myself.
This turned out to be a really good thing, because a few days later people started receiving EMPTY envelopes!, and here is why:

Stupid me didn’t realise that the lose rulers in the envelope can fall out the gap in the folded end! And I’ve been packing and shipping stuff for 20 years…
So the mailing room floor no doubt ended up full of lost rulers as some of them inevitably went in the sorting machine upside down.

Then of course, some arrived with torn envelopes, but at least still with rulers. I knew this might happen, and it was a bit of gamble that didn’t pay off. It was worse than I thought. 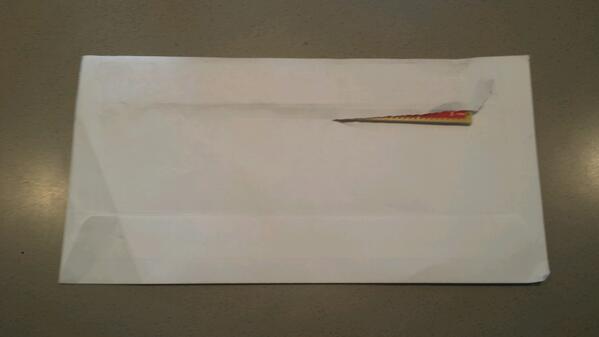 TIP #2: Packaging is important. Test it. Put some thought into it. Spend some money on it. Don’t cut corners.

Then came bulk manufacture of the rulers. They did a small run of 1000 rulers just fine, so I hit the reorder button on 8500. No problem right?
Wrong. Turns out their 8 days lead time blows out to 24 days for this kind of volume! Oops, sorry everyone…
TIP #3: More volume than you expect always equals more time, even on simply jobs like this. Pad that into your campaign promised date.

Then they turn around and tell me that they used manual methods (tape!) to hold down the 1000 rulers for routing, but 8500 would require pins to hold them down, so they need to add another hole to the ruler in the opposite corner. Any other option I ask?, Nope, not really, v-grooving sucks. Well, ok then, add the ugly hole.
I’m a former full time professional PCB designer, and I hadn’t heard encountered this one before.
TIP #4: Just because you have experience in the field, doesn’t mean the unexpected can’t happen.

Ok, so this was good, I ironed out some bugs. I needed tougher envelopes and ones that sealed right. This wasn’t as easy as it sounds. I searched high and low and finally found tear-proof that envelopes make by Dupont out of a material called Tyvek. Only problem was that these things are rare in Australia, and very expensive. I had to find a US source and import them directly form the US, all 2000 of them. And they ended up costing more than one of the rulers cost to manufacture!
But luckily I still enough enough profit margin to pay for the envelopes.

Although the tyvek envelopes were tough, what about those loose rulers? Would the sorting machines snag on the lose rulers? After the last debacle, I wasn’t taking chances, so I got some custom thick cardboard cut to fit. The mailing house recommended gluing them in place on the card (this worked). They weren’t expensive, but it was 2000 of them, and more of my profit margin down the drain.

Ok, problems solved. I’ll give these to the mailing house and that’s the end of it.
Well, turns out the US sized envelopes were almost 2mm longer than the maximum Australia Post standard, and all hell broke lose. Australia Post would not budge and said they couldn’t be sent at the standard letter rate. Shit.
But the mailing house eventually comes back and said “she’ll be right, leave it to us.”

Hey, this is one of Australia’s biggest mailing houses, what could possibly go wrong…

“What’s the tyvek stuff?, we’ve never seen it before, I don’t think our inkjet printer will print on them with the water based ink we have!”. Damn, off to the mailing house to do a test run. Luckily the ink dried instantly and we are back in business.

The mailing house said to leave it all with them, and they would handle the database, label printing, barcode printing, return address and postage, and shipment by Australia Post, no worries.
Several days later they said it’s all done and have been shipped. Awesome!

Then a week passes, and no response from anyone who’s got one. Hmm, it usually only takes a few days for at least some to arrive, especially to New Zealand, 5 days tops for the US.
Then another week passed before I finally get word of some dribbling in inside Sweden. Sweden!? Why Sweden first?
Then someone posted a photo of the envelope, and it had Swedish stamp on it covering my “Postage Paid Australia” mark. Hmm…

Then some reports from Singapore and a few other EU countries dribbled in. Again, all with the Swedish post mark. It took almost a month for them to arrive in the US and Canada!
Then my mailing houses finally admitted they didn’t use Australia Post as I had instructed and assumed they would (it’s a letter, right?), but used a company called Direct Link.
About the only info I can find about them in the web is someone complaining about what a horribly slow dropship company they are – no kidding.
Then the bullshit excuses came in from Direct Link. If I dried them out I could have fertilised my lawn.
It turns out my mailing houses whoever happened to come by that day, Australia Post or Direct Link. I lucked out and got the world’s shittiest mailing distributor.

TIP #5: Know exactly what service your mailing house will be using, don’t assume she’ll be right.

But the fun didn’t stop there. My mailing house forgot to print my country on the return label, even though I gave it to them in the exact format I wanted. Kinda important for overseas mail…
Not that it mattered much anyway, as the Direct Link covered up my return address and added their own! WTF? WHY? Morons.

TIP #6: Do a trial run though your mailing house first to ensure everything runs smoothly. Don’t just trust to pros, they can screw up too.

But now, two months later, it’s not over yet. I have about a 2.5% non-delivery rate. I anticipated some, but it’s probably enough that my spares wouldn’t cover it, so I’ll probably have to do another order and post these out manually at my expense.

So there you have it, how the world’s simplest hardware and international letter mailing exercise turned into a nightmare, with more things going wrong than I could have possibly imagined. And like I said, I’ve been in the mail order hardware business for 20 years.

Is there a bright side to all this? Yeah, I learned how to mail PCB’s the right way. Winner!